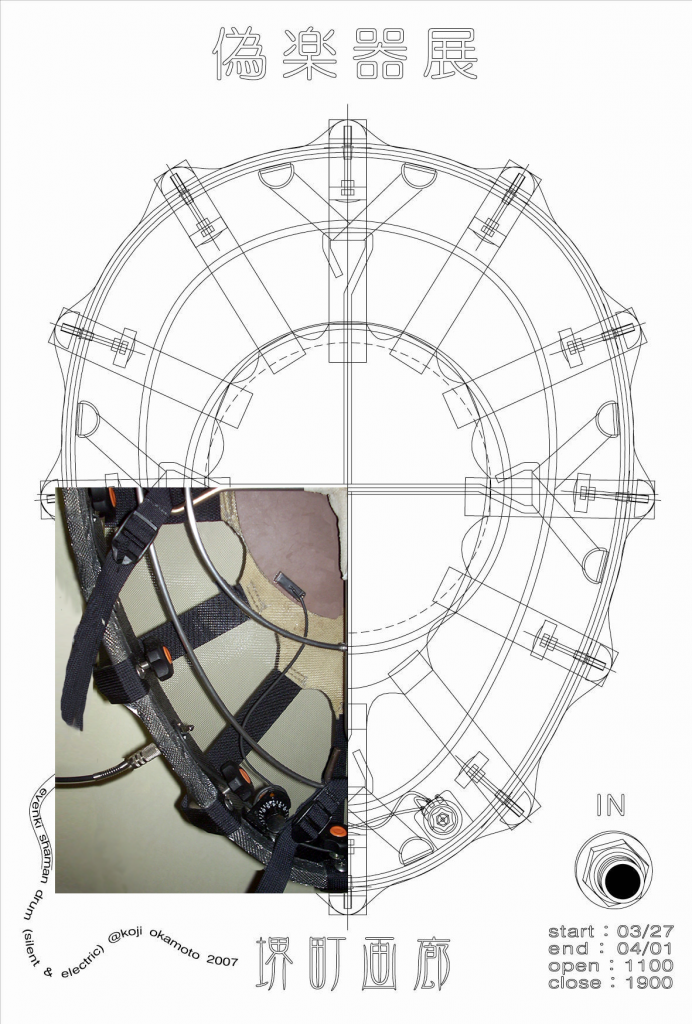 Evenki is a people of eastern Siberia and the north-eastern part of China. Living on reindeers that need to be grazed on fresh moss and grass in the forests, Evenkis lead nomadic life, changing their dwellings from time to time to seek their animals’ food. Like other minorities inhabiting the northernmost fringes of Eurasian continent, they believe in shamanism… That’s all I know about Evenki.

Evenki shaman uses a single-head drum, which is commonly seen not only among various ethnic groups of Siberia but also in Sami people of northern Scandinavia, “Eskimos” (Inuits) and the Native Americans. Although I have never visited Evenki people nor touched such a drum, in a museum in Irkutsk, Russia, I once saw an instrument that resembles those shaman drums, though I don’t even know if that was really Evenki’s. However, from that time on, I have been fascinated by the shape of the drum– the oval, or rather, egg-shaped rim with strange protuberances around it.

I really wanted to have one for myself; however, I was no shaman nor even close, so that it didn’t make sense that I would possess such a ritual instrument…. Nevertheless, I couldn’t stop being avaricious and somehow made up my own version of the shaman drum for myself. Similarly, I would be worried when I later made a parody of another ethnic instrument–
“Silent Electric Baidarka Tonkori” a light metal chimera of the baidarka kayak of Aleut and the tonkori of Ainu. I hope they will generously understand…

An awkward rhythm of poorly played percussion instrument is as bad as novice’s puke-inducing violin noise. In such a case, an electric instrument with headphones plugged in, which conveniently erase the noise, really helps… thanks to its soft sound even when unplugged, nobody around you won’t be bothered or annoyed… Oh, I’d like to add that if you plug this silent drum to an electric amp and put on a pair of headphones over your ears, the trans-inducing power of shaman drum dramatically increases for the sound throbs right in the middle of your head! 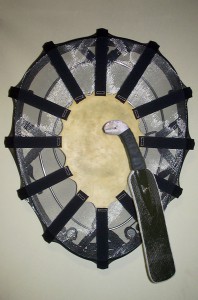 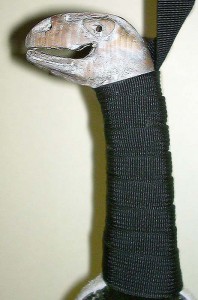 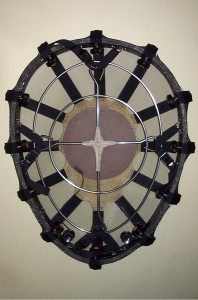 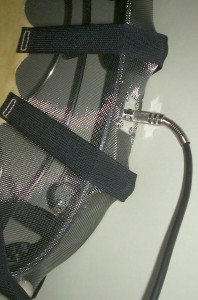 The last work as an undergrad project at MSU (1986). I was wondering if I could call this this toy stuff a graduation work… (I appreciate my major professor’s generosity)

Although I have dug out a video casette of two Tink kinetic pieces and posted them along with the only surviving “Jump Rope” up to YouTube, the other and the last piece I was looking for was missing. Today, I went to my old house, where various stuff is boxed and stored, and finally managed to discover the thing.

Tinker Bell, using the sewing machine with the “Thinker” trade mark, is mending her broken wing. She is apparently unhappy, looks up and sighs every time she finishes a line of stitches.

Your sound volume is normal!

You can hardly hear the sound because the fiddle was so made– it is meant to be “Silent”. (You are lucky because you don’t hear my poor execution)

Although instrument is unplugged, the stethoscope’s earpieces are plugged into my ear holes, giving me a pain and distraction while playing… (It’s a good excuse for my terrible performance)

More photos on my blog: http://okamoo.com/MusicalInstrument/StethoscopeFiddle.html

Until now, I have made several “fake musical instruments” most of which were electric. I call them fake because there aren’t such things like “Electric Solid-Body Morin Khuur”, “Silent Electric Evenki Shaman Drum”… One day, a musician asked me to make a pochette fiddle, which was supposed to be a serious project. I managed to finish it and consequently had an additional orders by the other musicians.

Then I asked myself “hey! Can you really make those “real” musical instruments without being able to play them?” and also thought “if only I had one, I would be playing it… Yeah, I must make one for myself”.

My first fiddle had a laminated carbon FRP body and a gourd to enhance low sound, and of course electric pickup for plug-in play.

As you know, the screeching noise made by a violin novice is intolerable to bystanders but the player must listen to it… My first fiddle had a resonance body, so that it is impossible to get rid of the sound. Then I had to make another one without sound amplifying structure yet can supply ample sound to the player.

Stethoscope is the solution. The fiddle without body produces very soft sound that cannot annoy neighbors even in the middle of night. Along with bone conduction, the stethoscope conveys sound loud enough for the player. Also, good thing about it is that  you don’t have to deal with electric stuff such as shield line, amp and headphone/speaker. Well, there is always a drawback when you make something new… Stethoscope is not meant to be worn for long time, and gives you a pain in your ear holes if you keep using it even for few minutes.

When I began practicing to play the violin, I couldn’t hold it under the chin, so I had to invent a “violin strap” something similar to a guitar strap. The strap turned out very useful– for a short period of time. As I get used to playing the instrument, the contraption has become a nuisance every time I wear it.

My dream is to play J.S. Bach’s Suites for Unaccompanied Cello, which was not for violin– but anyway, my fiddle is a fake instrument and I myself am a fake player without a formal training of violin at all, so who cares!