It was a good fine day today, so that I slipped in my Fiat 500 to get to the mountain house.

Just about reaching the mountain pass, it started to snow. I was worried about the tires, which were not for snowed or frozen road. 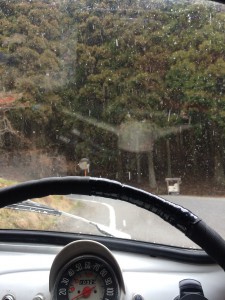 When I arrived, it looked the weather had recovered, but soon the situation started to get even worse. Then I decided to do stuff only for a few hours or so to be able to get back home before sunset. 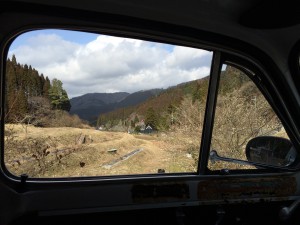 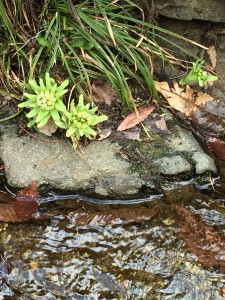 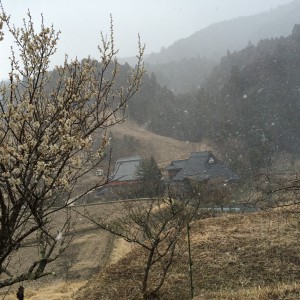 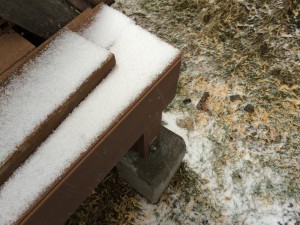 I was sort of hurry to work, and made a major bummer– stepped on an old nail, which pierced the shoe sole and stuck in the thenar of my left foot so deep. It’s swollen and still aching even now… 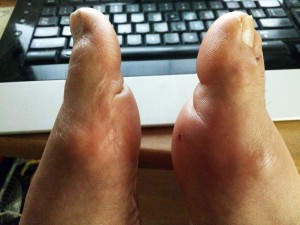 Oh, well… I quit the day’s work much earlier, for it seemed a bad idea to continue in the miserable now with an aching foot. I thought I could have got more injury; the work of the day was mainly with a circular saw, which is very dangerous.

On the way back, the thermometer at the pass indicated “-1″(degree, Celsius= below freezing point).  There wasn’t much snow and the road surface wasn’t frozen yet, but if I went there after dark… uhhh… I don’t even wanna think… 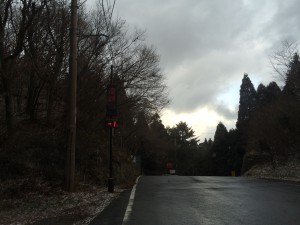 Guess what I was making. 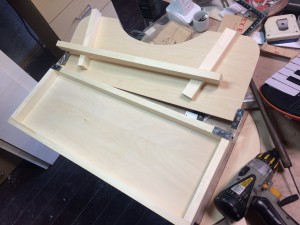 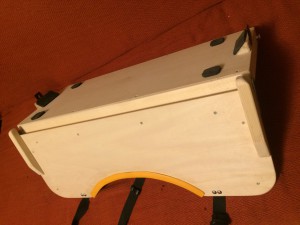 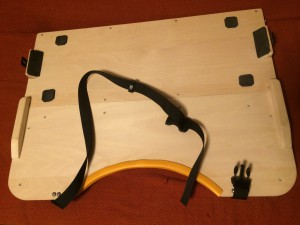 Drawing board?     Nope, but kinda close. 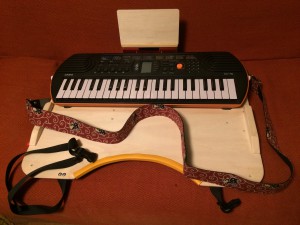 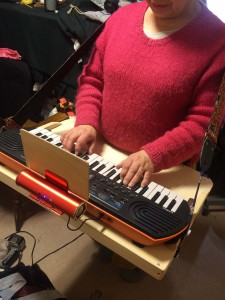 Yesterday, I went down to the downtown, Kyoto, and came across a bit strange lady. She must be around eighty, holding a life-sized baby doll in her arm. I was standing behind her on a descending escalator in a department store. At the first glance, I thought it was a real baby but it didn’t take long to realize it wasn’t, for the combination of an old lady and a baby in a department store seemed just too bizarre to me.

While we went several flights down together, she  whispered something to the doll a few times, and I finally became unable to suppress my curiosity as we reach the ground level. “How cute!” I said over her shoulder from behind. She turned around to show her smiling eyes and the doll’s face made of cloth.

The old lady was not senile if odd. She explained to me that the doll had a battery built-in and it even talked: “Hi, my name is Takkun. It’s March, 22, today and the temperature is 17℃” and so on. The doll was purchased at the very department store six years ago, she added. Everything she talked about was reasonable and in order.

We chatted over the doll for a while and then parted. Less than ten steps away form her, I thought twice and headed back for her to asked for a permission to take a photo. She said OK and showed off her baby. There must be a big smile underneath the white mask as she was being photographed; she looked happy.

Nonetheless, I couldn’t  shake off the sad feeling derived from the situation that the lonely elderly person holding a robot baby was hanging around in a crowded department store. Someday in the future, I, too, might be seen in the downtown, holding my fake musical instrument, trudging on the street.

Five minutes later, just a couple of blocks away from the department, I was walking down the street. A movie poster caught my eye– it was of “Finding Vivian Maiyer”. I had virtually no idea about who the hell this Vivian Maiyer was, but in the monochrome poster, she was staring at me, holding a Rolleiflex  in her hands: the whole image of the photograph used in the poster was actually a reflection on the glass of a large show window or something.

I was on the way to a bookstore then, but the poster had changed my mind. I went to the movie theater instead, thinking I could go to the bookstore after the movie. Though I am not going to write about the movie here, I just want to say it was so overwhelming that I had little spare space left in my mind for books that evening.

Vivian Mayer shot well over a hundred thousand photos mainly of people on streets but she never had even a single exhibition. Question was; who did she want to show her tremendous amount of work to? I know the answer; the most understanding viewer of her work was herself but no one else, she certainly knew that. Unlike her, I am rather unprolific in terms of art work, but I can instinctively feel that I share the same kind of  mentality with her when it comes to making art pieces and the exhibition.

In Mayer’s innumerable photos, the old, often poor and in a miserable state, were the subjects. Towards the end of her life, she herself was living a life like those people in adversity in her pictures. Too sad, and I kind of sense that I might be following her steps.

I don’t believe in fatalistic reasoning. So I don’t see any rational relation between the lady with a doll and Vivian Maiyer. Even so, I find it interesting that I have bumped into them one after another. 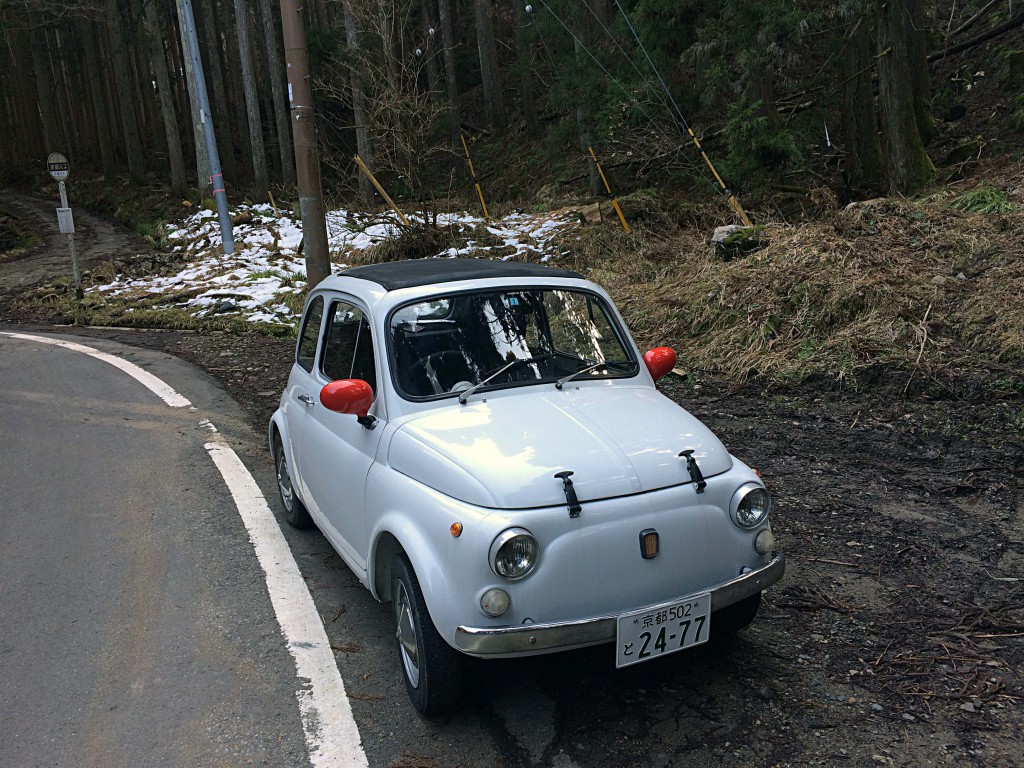 I look around, leaves are brown now
And the sky is a hazy shade of winter

Look around, leaves are brown
There’s a patch of snow on the ground…